Although seen as a safe alternative to cigarettes, vaping is far from innocent when it comes to adverse health outcomes.

The use of e-cigarettes, more commonly known as vaping, has significantly grown throughout the United States over the past decade. Vaping has been marketed as the subtle, modern, and most importantly, less harmful way to smoke compared to traditional cigarettes. While it’s true that e-cigarette users are not lighting up and ingesting tobacco to get their nicotine fix, vaping is not nearly as harmless as it’s made out to be by its manufacturers; e-cigarettes still contain toxic chemicals that the CDC has linked to chronic lung injury, heart failure, and even death.

In December 2019, the federal minimum age of sale for tobacco products, including e-cigarettes, was raised from 18 to 21 years. This change in legislation followed pushback from public health advocates against e-cigarette companies’ pernicious targeting of American youth. While traditional cigarette usage among young people decreased by approximately 10 percent between 2011 and 2019, according to the CDC, e-cigarette use has emerged as the most prevalent form of nicotine consumption during this same time period. A primary culprit of these high vaping rates among young people is flavored e-cigarette products — vapor flavors such as mint, fruit, and candy have been pushed to appeal to the youth market.

According to the FDA, 3.6 million adolescents and teens reported e-cigarette use in 2020. While this number is down by 1.8 million from 2019, vaping rates among underage and young adult populations is a pressing public health concern. To understand vaping patterns among the young people in America — specifically, 18 to 24-year-olds — the data scientists at Insurify examined the CDC’s data to identify the states with the highest shares of e-cigarette users among their young adult populations. 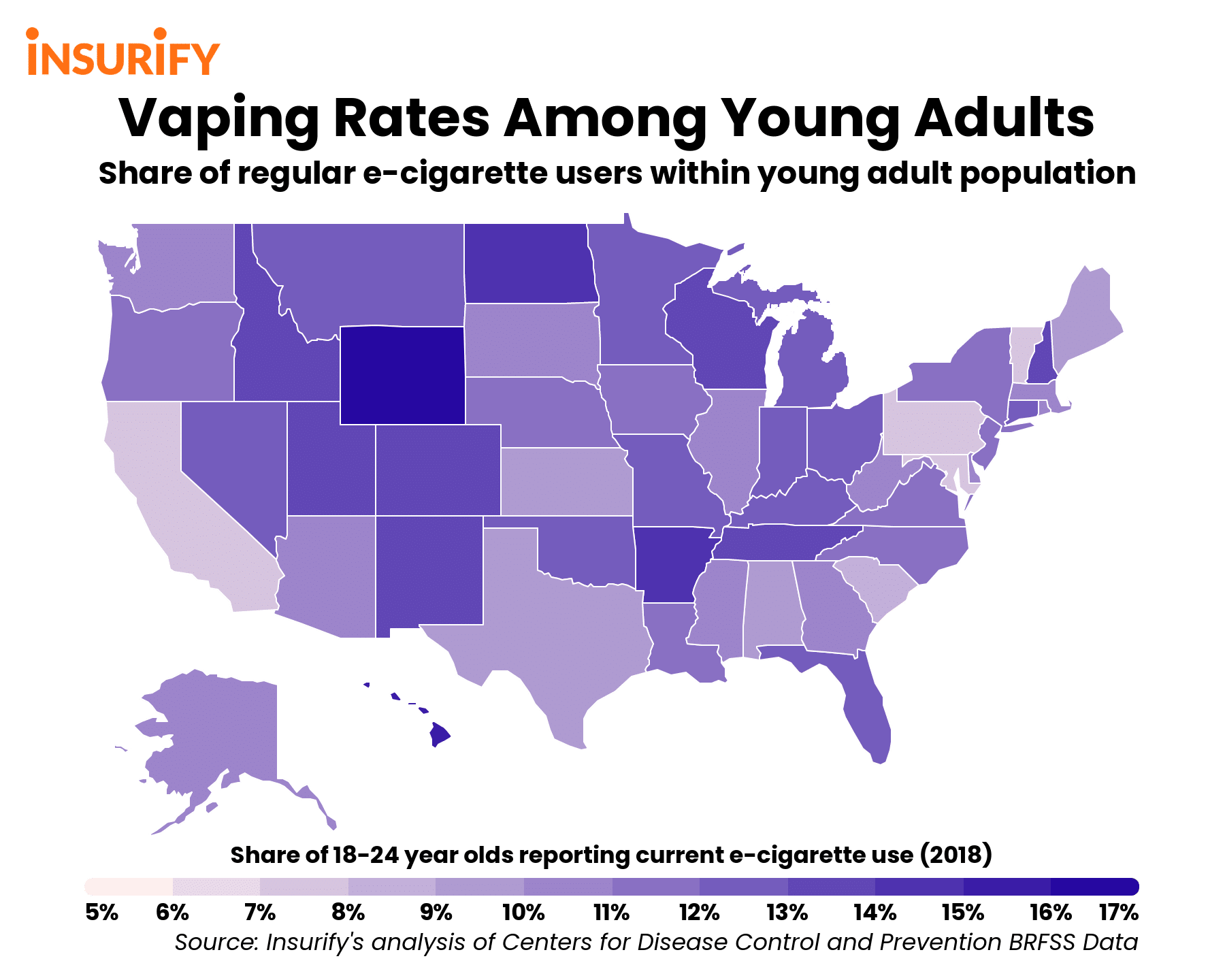 The data scientists at Insurify, a health insurance comparison website, examined data from the Centers for Disease Control and Prevention (CDC) State Tobacco Activities Tracking and Evaluation (STATE) System initiative. The CDC’s data comes from the BRFSS Survey Data project, which is an ongoing, state-based surveillance system that collects information about modifiable risk factors for chronic diseases and other leading causes of death, including e-cigarette usage.

To identify the states with the greatest share of vapers amongst the young adult populations, Insurify’s researchers looked at the average proportion of 18-24-year-olds who reported “current use” with e-cigarettes at the time of the study in 2018. State tobacco settlement payment totals from 2019 were provided by the Kaiser Family Foundation. Tobacco settlement payments are a result of a 1998 civil settlement that mandated tobacco companies to compensate states for the medical costs of caring for people afflicted with smoking-caused illnesses. This settlement, which is the largest in U.S. history, requires tobacco companies to pay $206 billion over the first 25 years and indefinitely into the future, according to the American Lung Association.

Monthly premium costs for Medigap Part G are from MedicareAdvantage.com’s most recently available data in 2018. Medigap Supplement Plan G covers the majority of out-of-pocket costs not included in Original Medicare (with the exception of Medicare Part B’s deductible). History of tobacco use can affect the cost of Medigap premiums, due to the association of smoking and increased risk of healthcare expenses.

The Centennial State holds the tenth spot in the rankings. The state’s teen vaping epidemic was brought into the spotlight in late 2019, when vaping-linked illnesses of 11 individuals sparked a statewide push to enforce more legislation banning flavored e-cigarette products. However, as of June 2020, Colorado has yet to raise its minimum tobacco sales age from 18 to 21, which may play a role in the prevalence of vaping among its young adult population.

The prevalence of e-cigarettes among young people in Wisconsin has been a pressing public health epidemic in recent years. Young adults in Wisconsin vape at a rate that exceeds the national average by 14 percent. In 2019, the Wisconsin Department of Health Services reported a surge in vaping-related lung damage across the state, with officials urging the population of e-cigarette users to not take vaping’s serious health outcomes lightly. The Badger State additionally received more tobacco settlement payments in 2019 than the nationwide average, indicating that tobacco and nicotine usage in the state has cause for concern.

While the eighth state on the list is known for its vast mountain ranges and New England charm, it may still have a ways to go when it comes to public health outcomes. New Hampshire’s share of young adults who vape is 15 percent higher than the national average. The state has been attempting to limit e-cigarette usage among young populations over the past few years — in August 2019, amendments to New Hampshire’s Youth Access and Use of Tobacco Products law were made to specifically prohibit e-cigarette and vape products from public education facilities.

In the Beehive State, over 13 percent of young adults use e-cigarettes, making Utah the seventh state in the rankings for vaping rates among 18-24-year-olds. In September 2019, the Salt Lake Tribune reported that Utah’s volume of vaping-related illnesses was among the worst in the nation at 13.3 cases per capita, which was followed by an emergency administrative rule requiring tobacco retailers to post information about the health outcomes of vaping. Utah has followed the nationwide amendment and as of July 2020, has banned all e-cigarette sales to anyone under 21.

Idaho is sixth in the nation when it comes to young adult vaping rates — 18-24-year-olds in the Gem State frequently use e-cigarettes at a rate that exceeds the national average by 17 percent. Idaho saw a rise in vaping-related illnesses statewide through late 2019, prompting a broader conversation about the dangers of vaping and hearings at the state legislatures about how deadly the outcomes can be. However, as of June 2020, Idaho has yet to adopt the national provision to raise the age of tobacco sales to 21 — according to the Public Health Law Center, any individual over the age of 18 can still purchase tobacco products.

The fifth state on the list, Tennessee, has 18 percent more young adult e-cigarette users than the national average. As of January 2020, Tennessee’s Department of Health reported 78 lung injury cases as a result of vaping and e-cigarette usage, with two confirmed deaths. Additionally, the tobacco settlement payments received by the Volunteer State in 2019 exceed the national average by 29 percent, signaling that tobacco-related public health outcomes in the state are grim. As of June 2020, Tennessee also has not raised their minimum tobacco purchasing age to 21, but given the nature of the state’s youth vaping rates, this may be due to change in the future.

Arkansas is fourth in the nation for its share of young-adult e-cigarette users. The proportion of 18-24-year-olds who vape in Arkansas is 22 percent higher than the national average, and as of March 2020, the state has experienced 23 cases of vaping-related lung illness. However, Arkansas did adapt the 21 and older tobacco sales law in 2019 as a measure to prevent youth vaping rates from increasing.

The third state in the rankings is North Dakota, whose share of young adult e-cigarette users exceeds the national average by 24 percent. The North Dakota Department of Health reported in March of 2020 that the 18-24 age group had 10 confirmed or probable vaping-related illness cases, the highest of any age bracket. North Dakota’s minimum age for tobacco purchasing is still 18 as of June 2020, but perhaps the state will raise it to 21 should the youth vaping epidemic continue in the future.

Hawaii has the second-highest young adult vaping rate. The population of 18-24-year-olds who use e-cigarettes regularly in the Aloha State is 27 percent higher than the national average. According to Hawaii’s Youth Electronic Smoking Devices Prevention Project, young people in Hawaii actually began using e-cigarettes before young adults on the mainland, with a 20 percent rise in vaping between 2011 and 2017. However, Hawaii’s minimum tobacco sales age has been raised to 21, demonstrating the state’s commitment to reducing young adult vaping overall.

The first spot on the list goes to Wyoming, whose young adult vaping rate exceeds the national average by 33 percent. In December 2019, the governor of Wyoming issued statements urging state residents to limit or avoid e-cigarettes altogether, following the confirmation of two vaping-associated lung illnesses in the state. Wyoming’s relatively small population has seen the growing effects of vaping on its young adult population, sparking statewide efforts to eradicate the damages. One of the steps Wyoming has taken has been to follow the national provision and raise the minimum tobacco sales age to 21 as of June 2020.

If you have questions or comments about this article, please contact insights@insurify.com.